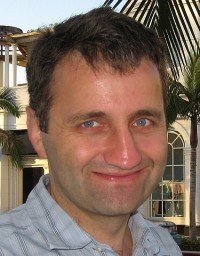 The late 2000s witnessed a shift of interest towards other fields. Andrei’s doctoral research, completed in 2009, is in Machine Learning applied to large-scale tasks in Natural Language Processing. His doctoral dissertation includes one theorem of importance to scaling graph-based methods to large learning tasks, and an original algorithm DynTrie that combines dynamic programming and the trie data structure to the end of optimizing large string similarity computations.

Simultaneously with his doctoral work, Andrei became a contributor to the D programming language, in which he recognized a potentially superior vehicle for furthering the ideas pioneered by Modern C++ Design. Since 2006 he became co-designer of the language together with Walter Bright and the main designer of D’s standard library. Andrei introduced new language features and a host of highly generic implementations of classic algorithms. His library design introduced the cross-linguistic concept of range, which combines the expressiveness of iterators as defined in C++’s Standard Template Library with the safety and convenience of the Iterator design pattern. Andrei’s third book The D Programming Language (2010) is an authoritative guide to the language.